Last weekend I was able to attend the 21st Bonsai-a-thon hosted at the Huntington Gardens. It was a good opportunity to meet members of the bonsai community and to check out some rad trees! I was only able to stay for a few hours Saturday and for the first half on Sunday. Nonetheless, I thoroughly enjoyed the event for the time I was able to attend.

Meeting new people is my weak suit, so it was great for me make some bonsai friends.

I had missed the demonstrations in the morning but still was able to check out the displayed trees and vendors. The display was hosted by the Viet Bonsai Society for this years show and the quality of the trees were superb. I saw many familiar faces and vendors including Frank Yee, who has been very nice to me since I joined up with Santa Anita Bonsai Society and Barry Altshule who I grabbed a nice live oak from 2 years ago. No shots of vendors unfortunately but here are the trees: 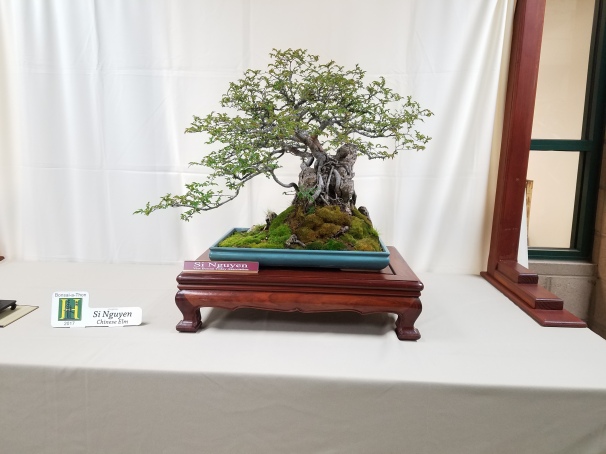 During the first day I went to Dick Ryerson’s table and talked to him and Phil Hogan (correct me if I got his last name wrong). Dick shared an interesting story about a glaze with me. The so called “million dollar yellow.”

A picture of the glaze I stole from the net

Glazes, or the finish put on pots, are a cumulation of chemistry, ingredients, and artistry. During the high firing process many metals or other components of the glaze oxidize changing in appearance and color. Variations are endless, but when done right you can make a pot of unrivaled character and beauty. For the same reason recipes for highly sought after glazes are often kept secret by the artist. For a particular pottist in China, that secrecy resulted in the recipe dying with him. To the Chinese government’s (or maybe a private company?) dismay, no one could reproduce the highly sought after yellow. Desperate to have the recipe again they offered $1,000,000 (yes, one million dollars) to anyone who could reproduce it. Potter Otto Heino and his wife would spend 15 years trying to reproduce the glaze, and was ultimately successful in doing so. Officials came to his home, confirmed that the glaze was indeed authentic, and paid him the 7 figure check. There was one caveat though–for as long as Heino was alive they could only buy the glaze from him, but would give the formula after his death.

The most amusing part comes next. Heino took that 7 figure sum, presumably an unheard of amount of money in the community he lived in, and deposited at this local bank. Word got around that Otto Heino had deposited a million dollars for “pot.” Yes…that kind of pot. Due to the misunderstanding the local police stormed into his home the following evening and tore up his place in search of the aforementioned “pot.” Goes to show how valuable “pot” can be.

I ended up buying a pot from Dick and put a nice small live oak in it. The tree in question is discussed in my previous post.

I was recommended by Dick and Phil to watch the Al Nelson’s demonstration on Sunday. Al’s an expert on developing live oak bonsai and was advised to talk to him. I arrived to the Huntington Gardens early Sunday morning with just that intention but ended up doing something entirely different.

One of the demonstrators was Bob Pressler. Bob’s a well known person in the local bonsai scene and owns Kimura Nursery in Northridge. I had just arrived at the demonstration room when Bob asked the onlookers for a volunteer. Surely, among the audience (most of whom are at least twice my age) had more experience with bonsai and was better suited to help out–but no one volunteered. I thought, “heck why not, it should be fun” and walked over to Bob’s table. For the next 3 hours I applied raffia and wire on a medium sized kishu juniper. Bob on the other hand was working on a bottle-brush (callistemon) tree.

Bob was donating the bottle-brush to the raffle while the kishu would be kept, only brought as a demonstration. As we were finishing up he turned over to me and asked, “do you know what we’re going to do with the tree?” Semi-cascade would be the obvious answer but Bob had mentioned he’d like to do something more interesting if possible, so I replied, “I don’t know.” He said, “you’re going to take it home.”

Al Nelson, to be working on a group planting of pygmy cypress 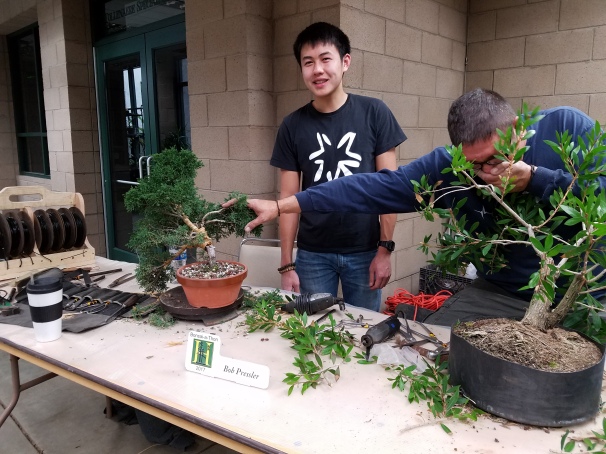 “What have you done to my tree”

I never expected to participate in the demonstration, not to mention taking a tree home. Bob’s a pretty cool guy and I enjoyed talking to him. Working the tree as a “demonstrator” really enabled me to talk to other members of the bonsai community as well. I was approached by Helen Barrett and talked about cycling, bonsai, and her athletic feats. She later introduced me to her husband, Jim Barrett who makes awesome pots. All in all, it was a fun experience. 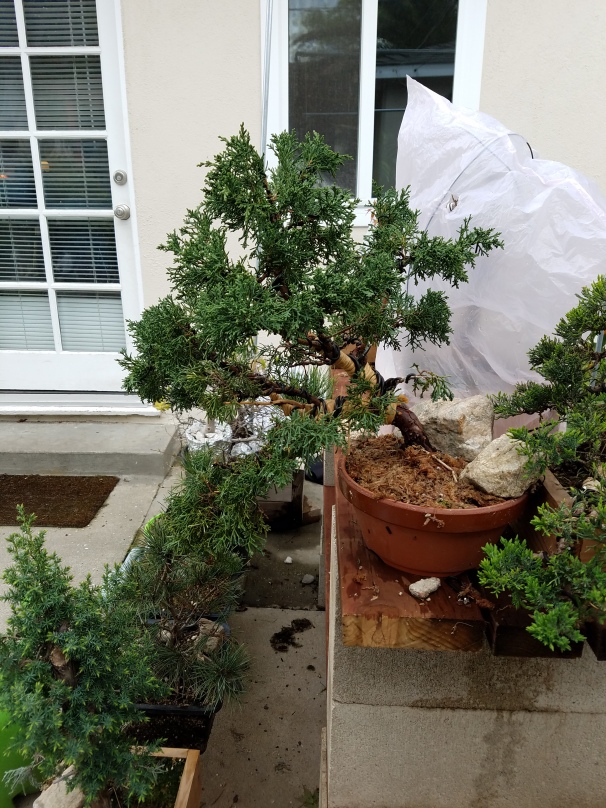 This is the best shot of the tree I have for now. I will be styling it later this month and will post it up on my blog so be sure keep a look out.

I hope you’ve enjoyed my post and feel free to leave a comment. These posts really do take quite some time to make so a subscription would mean a lot.