Easter Sunday wasn’t spent in pious gatherings or church festivities but rather in the deafening whirling of 8-9 simultaneously running dremels. I came unprepared for the onset of woody carnage. Flying bits of wood, flying bits, and flying die grinders. Good thing I was wearing eye protection. This action was found in non other than a Will Baddeley workshop–a bonsai professional from the UK with a focus on carving. There were 9 participants with a wide arrange of material including olives, bald cypress, buttonwood, boxwood, and others. 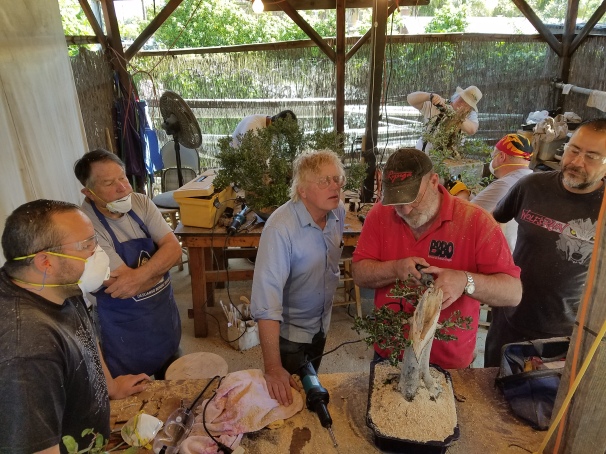 I neglected to take pictures of everyone’s’ trees but got a few good shots. For starters here are my own trees: 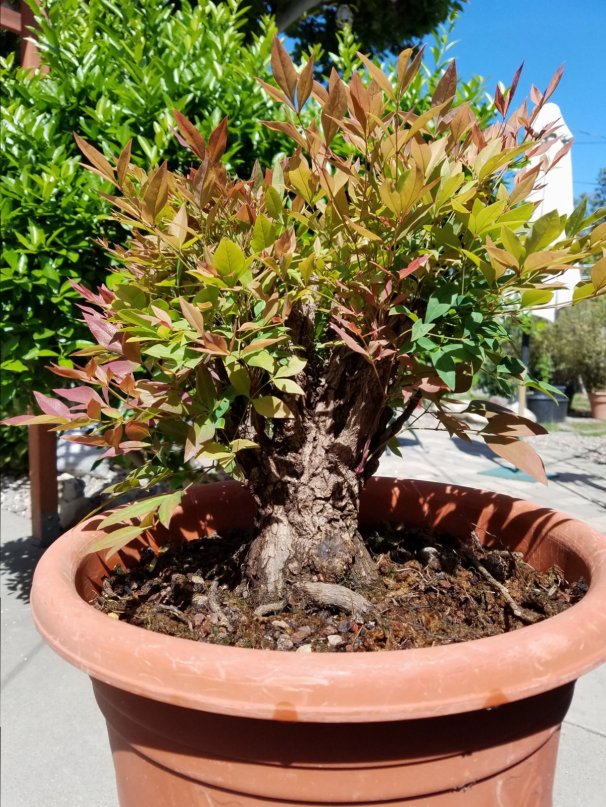 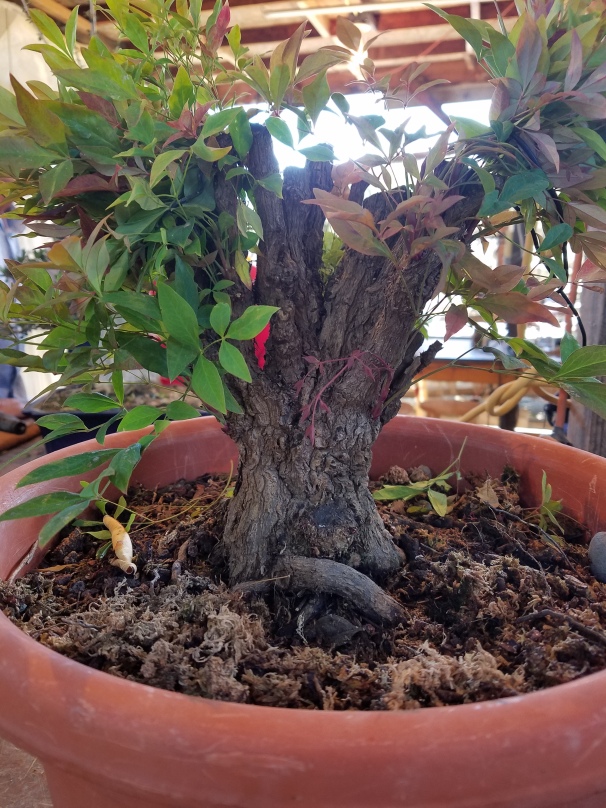 Foliage tied down to clear space for carving

I dug out this nandina several months back. Considering how much foliage it has put out and that it was relatively secure in the pot (meaning new roots) I was confident that the tree could handle the stress of carving. I would be carving down all the middle trunks that failed to backbud post initial collection as well as a stub in the front where I had removed a low sub trunk. Will’s workshops are very hands on–meaning you do most of the work and he provides the direction. 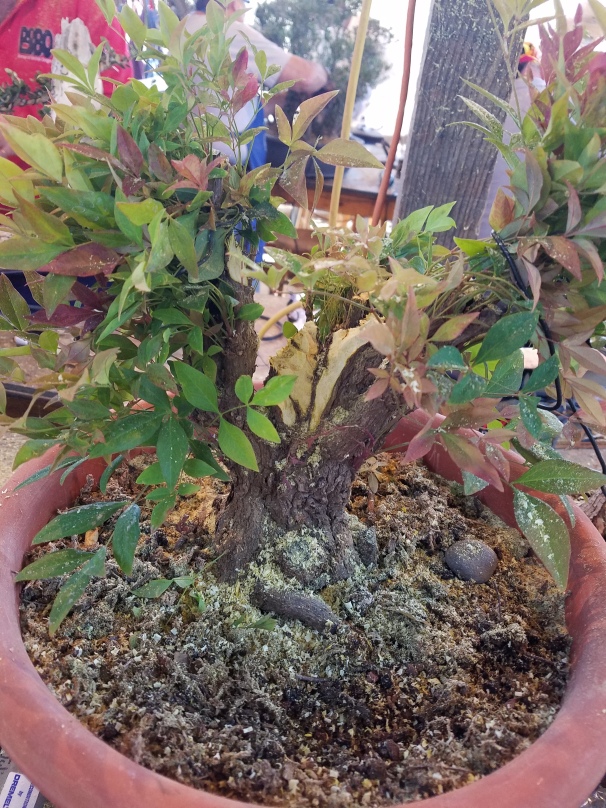 I really should of taken my time here and was fortunate I didn’t compromise the design. I went all out and grabbed a makita die grinder with a large 3/4s or 1 inch ball carbide and grinded away. All those mid sub trunks were obliterated but I quickly realized that I needed to leave some wood to do finer detail work on. 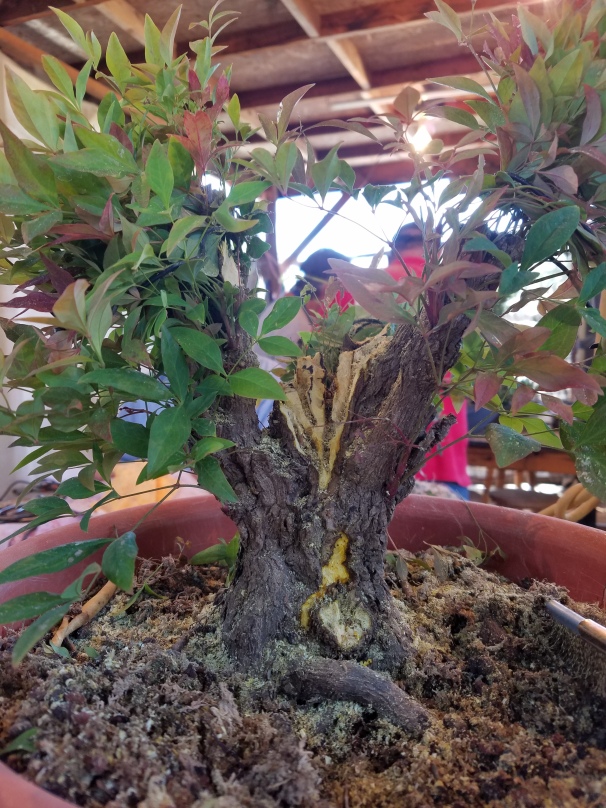 I used this triangular bit to add in some channels and prepared the next region for carving by stripping the bark. The stub would become an uro with a lip and the outer region would be recessed more. A lot of Will’s advice emphasized depth. Meaning that instead of carving clear cut holes you should do them at angles to create shadows or pockets. Doing so created more realistic deadwood as opposed to a contrived flat image. 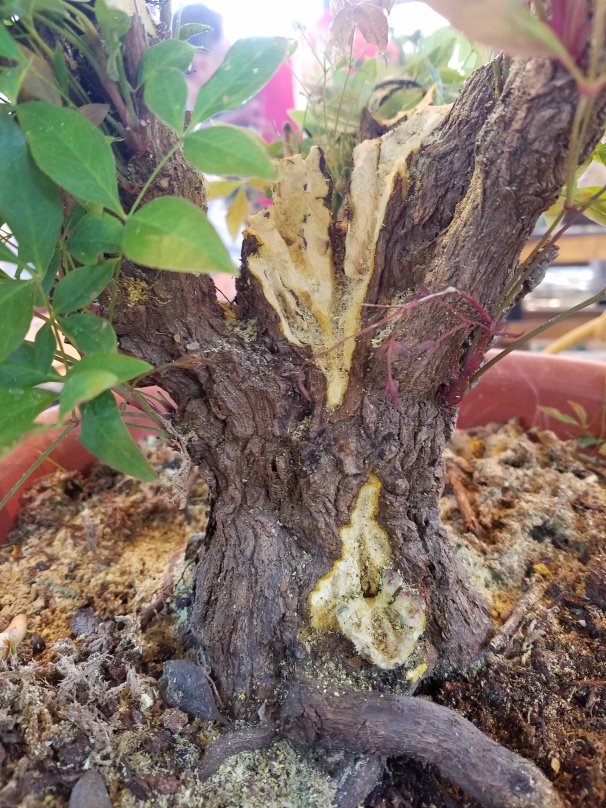 Best shot I could get at the time but you can see it taking shape. 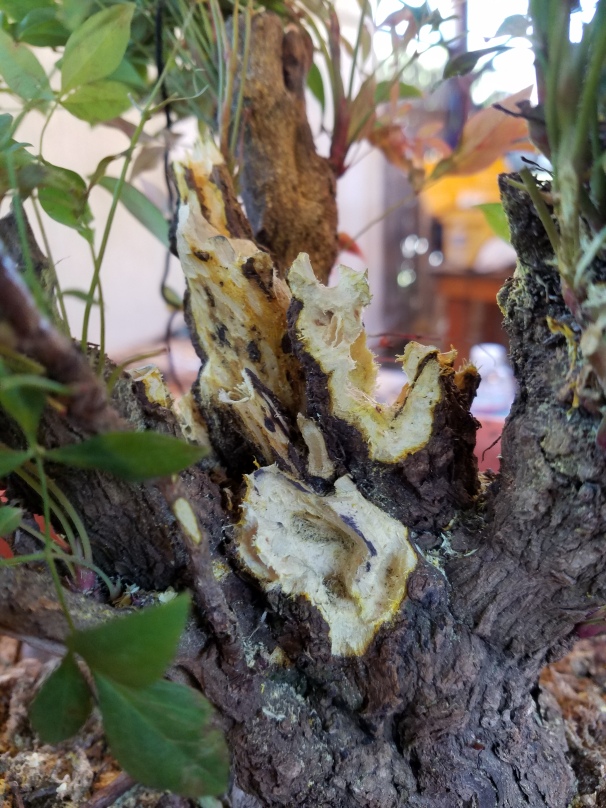 Rough work in the back. Edges need to be worked and detail put in. 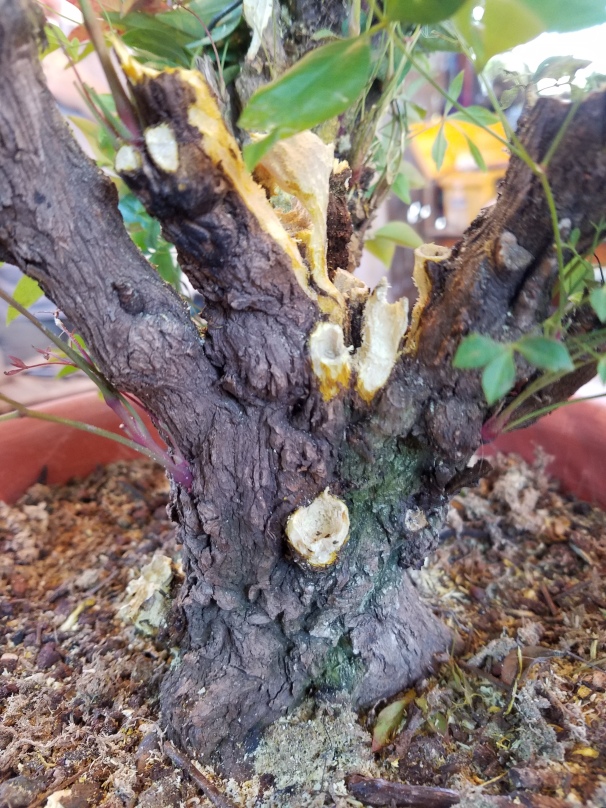 Hollowing some small sub trunks on another side. A nice detail I added here myself is a spiraling piece of wood. Its in the upper middle part of the shot and was carved out from one of the larger sub trunks.

Some finished shots. The carving could be refined and use some detail work but for the most part its done. I will allow the tree to grow unrestricted the entire year with lots of fert. Next spring I will cut back the outer sub trunks more and select primary branching. 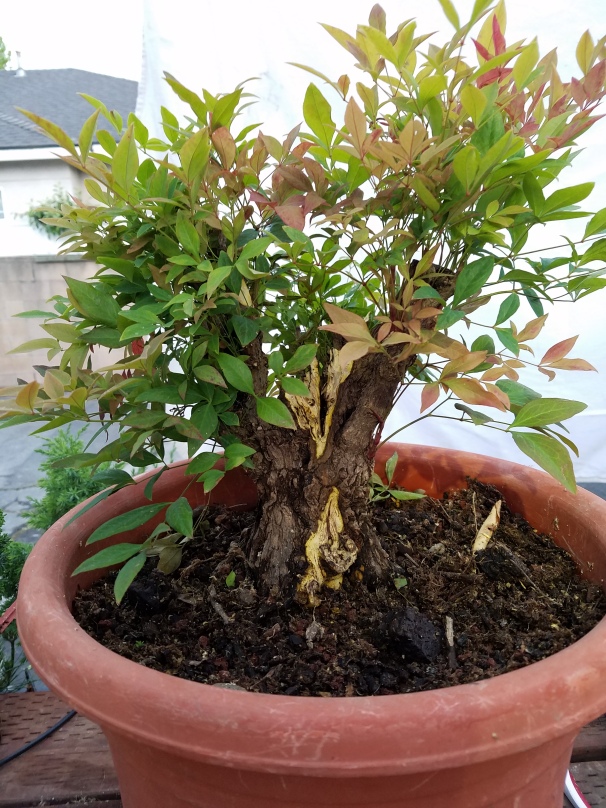 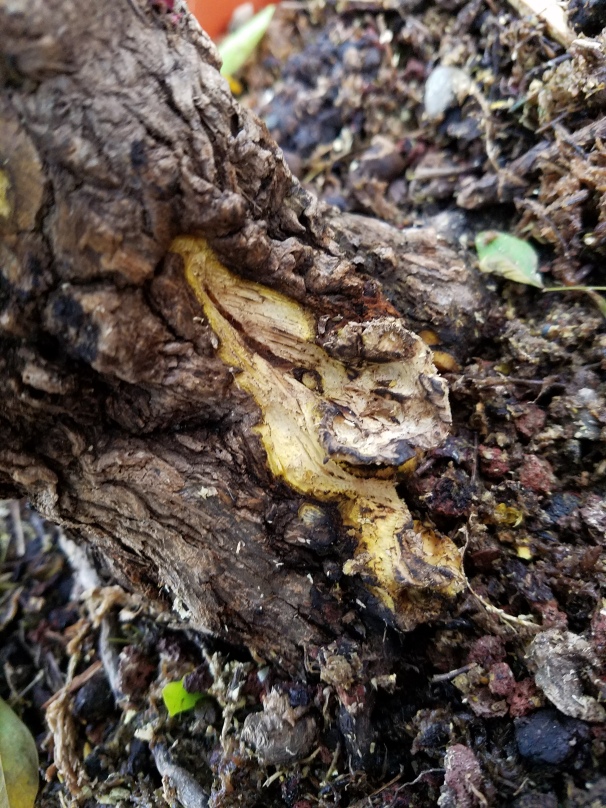 Image is a bit flat but the carving here was the best on the entire tree in my opinion. The lip has lots of detail and character 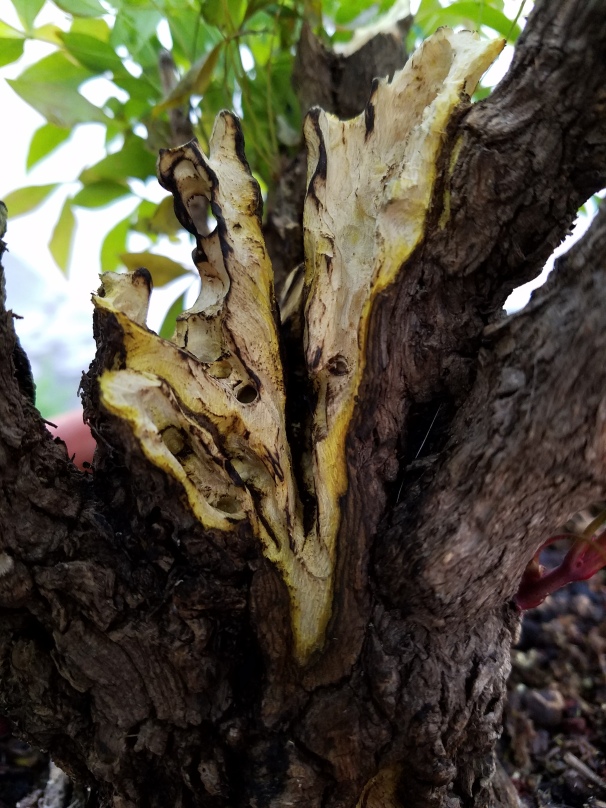 I realize that I didn’t clean up the bottom of the channels with the obvious drill bit holes. At the time the entire tree was covered in sawdust and details like that went unnoticed

This is jujube I’ve actually had for quite a long time. It started out as a tree in my parent’s yard. They were going to throw it out so I took it and bonsai’d it. Meaning chopping off 90% of the tree. Although covered this tree has REALLY good nebari with nice thick spreading surface roots. I didn’t really do anything with it and just let it grow the past few years. Last year it sulked a bit from over-watering but overall seemed out. There was some dieback from the initial cutback and decided that I might as well bring it to the workshop since I had no other plans. 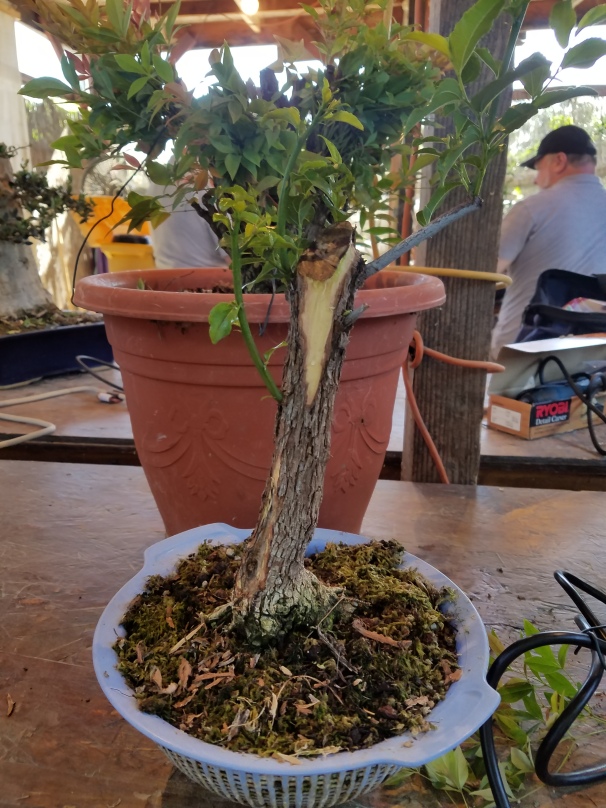 Removing bark and prepping for carving 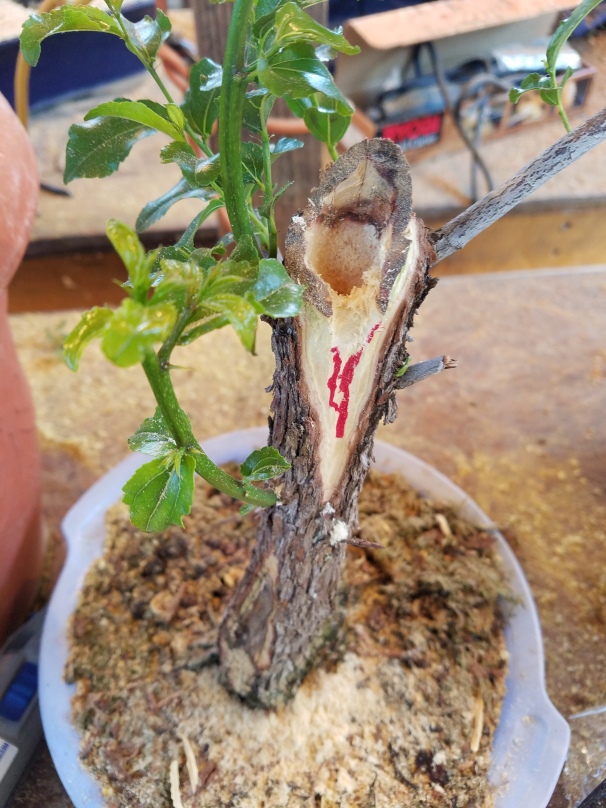 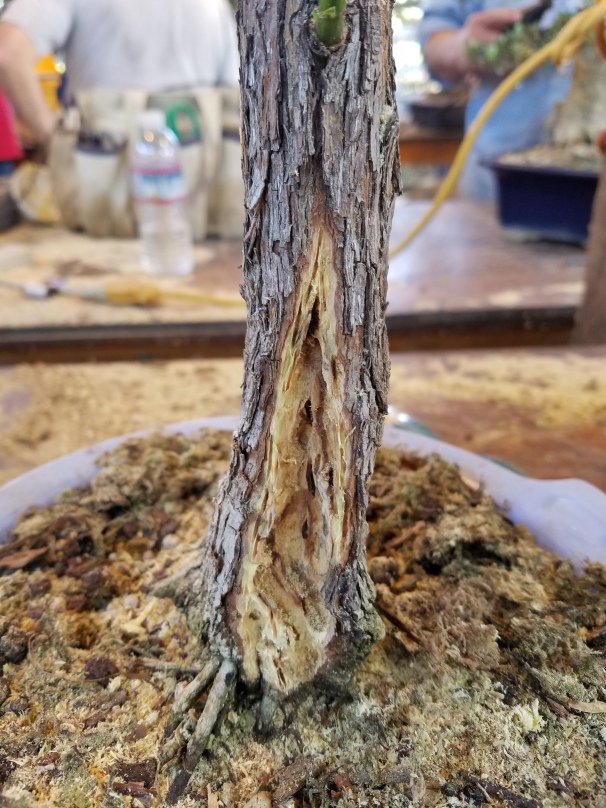 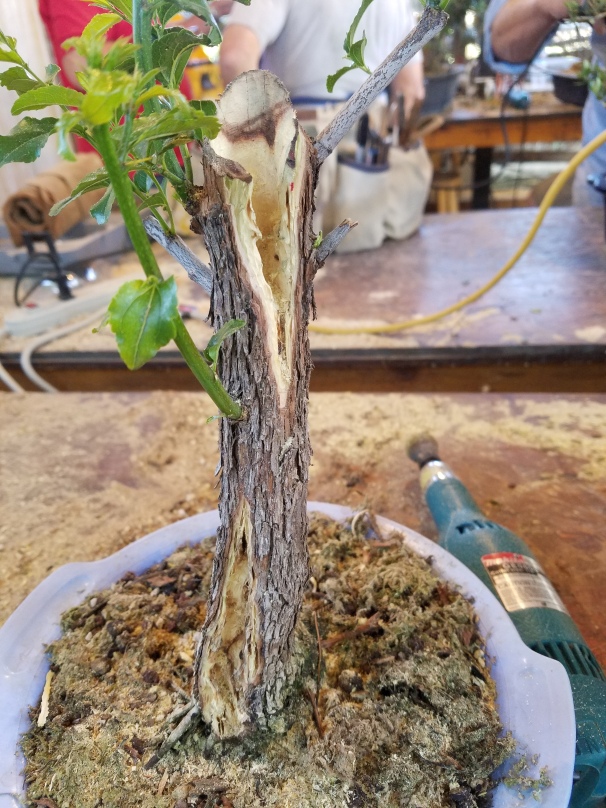 Top prepped for detail work. Did not take a close shot of top after detail but its dark. I’ll stick it in later 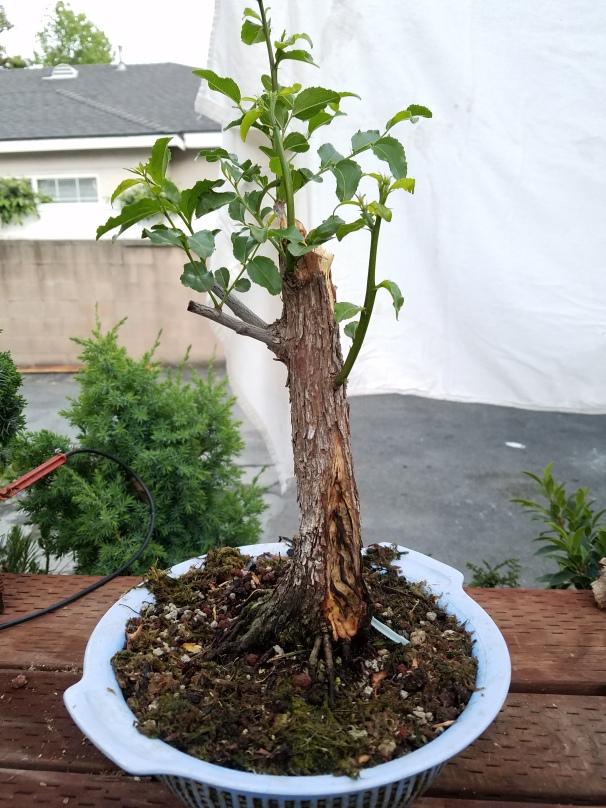 Final shot. Burned the wood a bit to add depth.

Plan is to feed heavily and allow for strong growth. I will use basic wiring and clip and grow to develop this tree. I plan to make the foliage weeping seeing how mature trees have overhanging foliage. If they live I’ll post updates in the summer. Should prove to be interesting projects for me to mess around with.

Anyhow enough of my trees and onto shots of the workshop and trees other people brought: 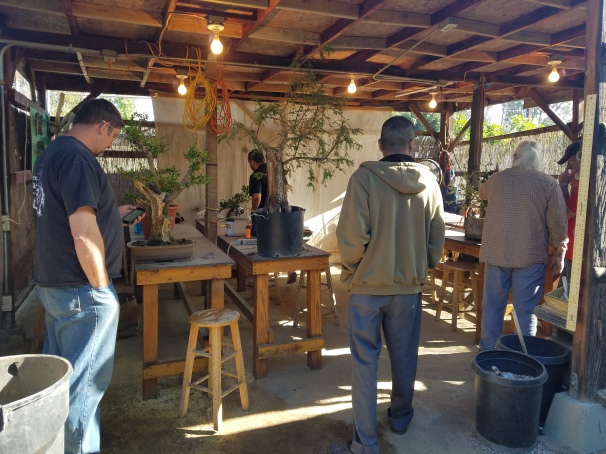 Settling in the morning 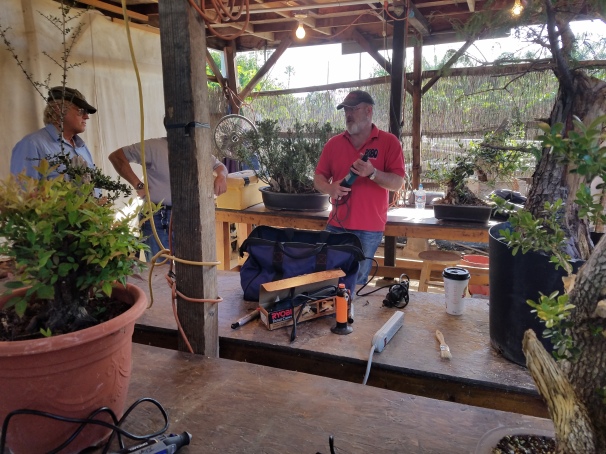 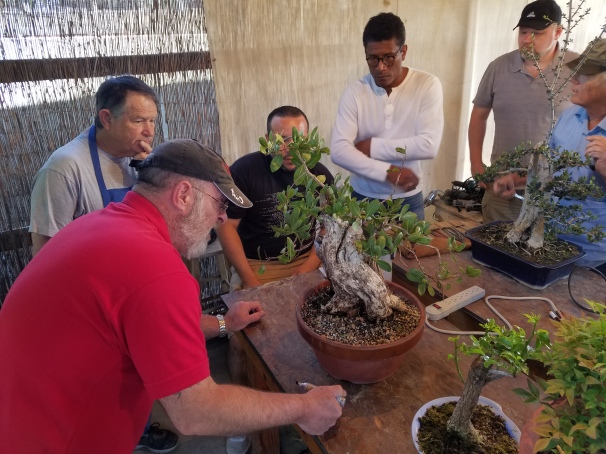 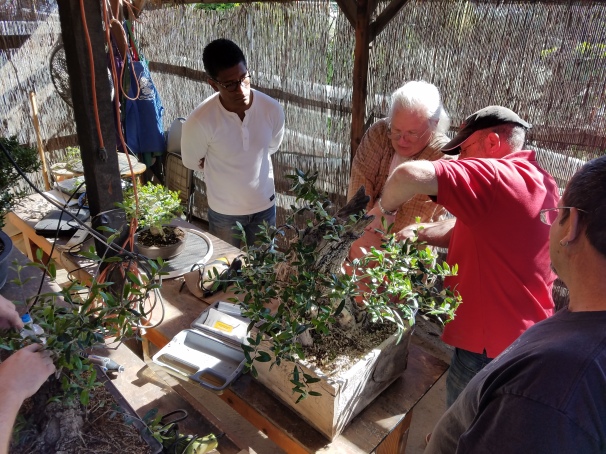 Work on a large olive. Neglected to photograph the tree but a lot of wood removed on this one 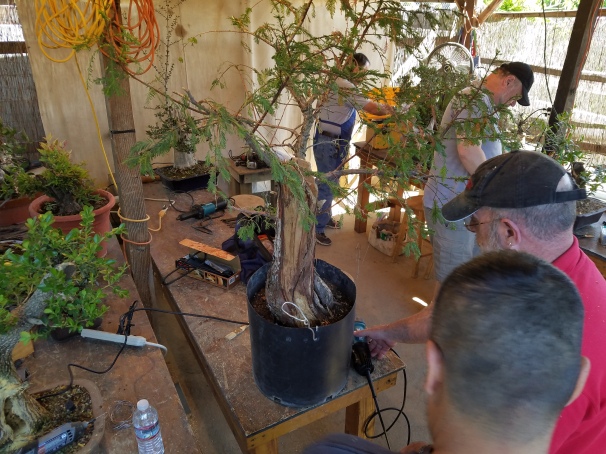 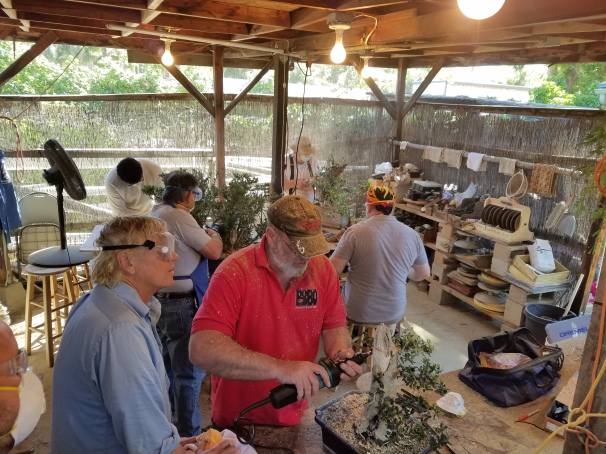 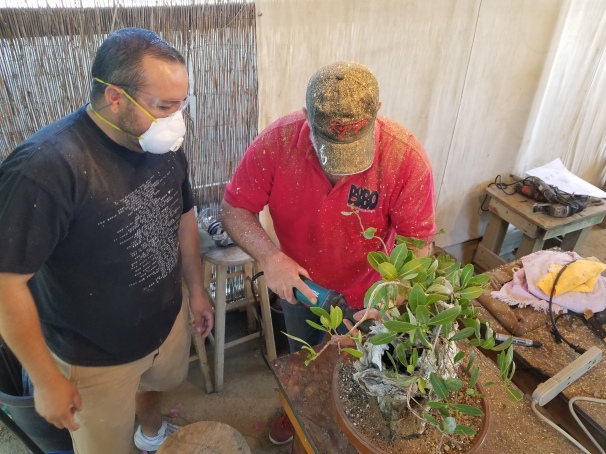 Nelson’s buttonwood. Gnarly deadwood on this one 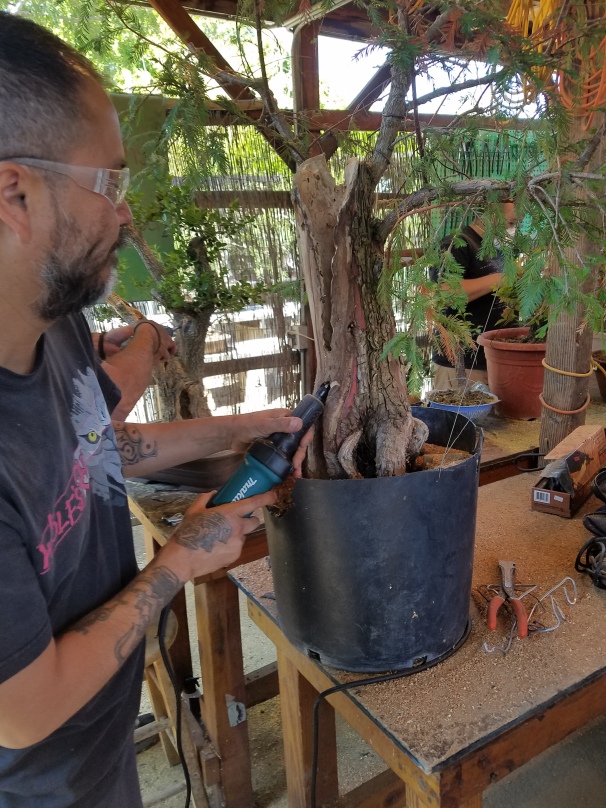 Getting all up in there 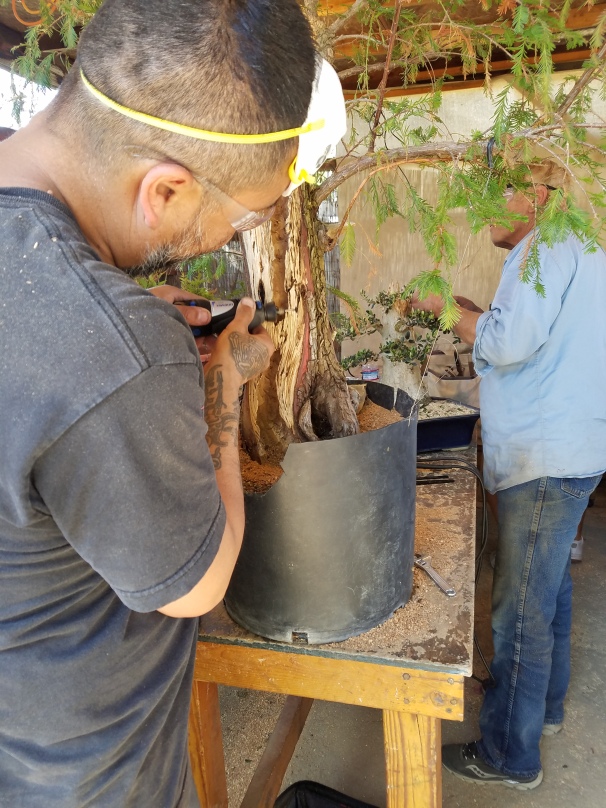 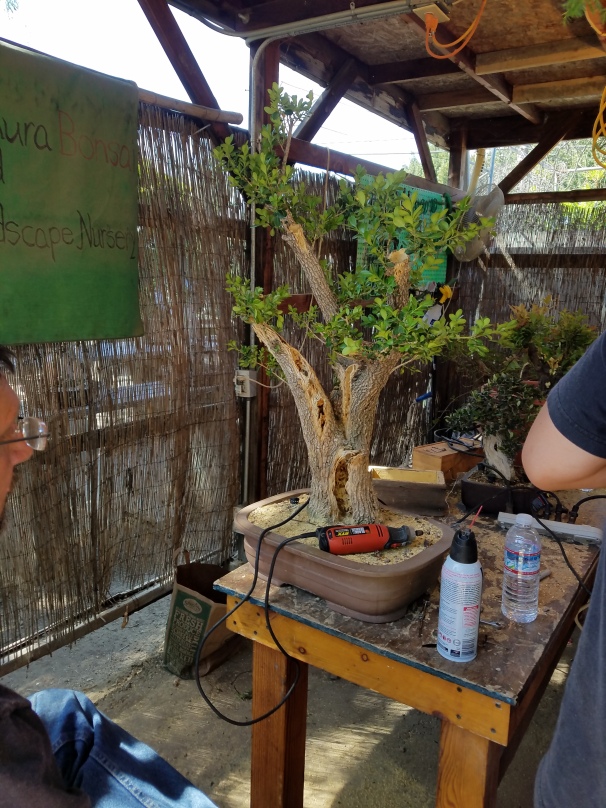 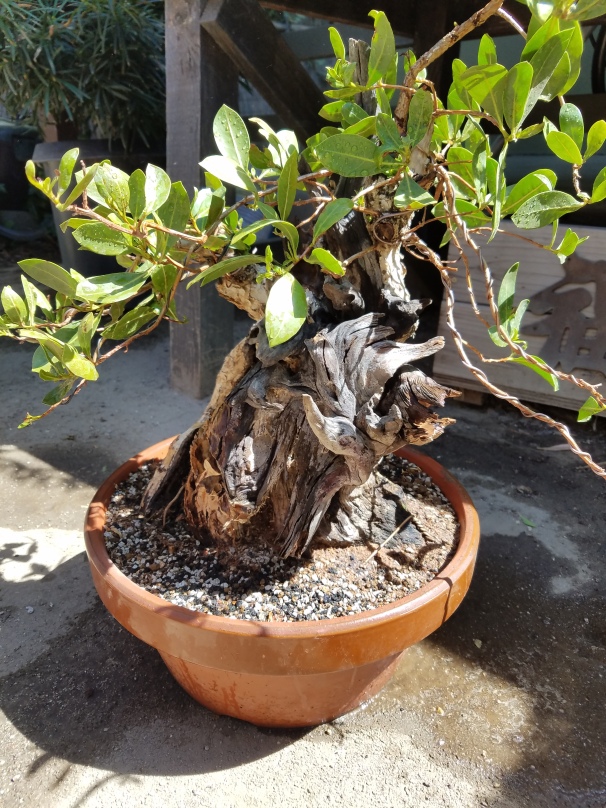 Nelson’s buttonwood enjoying a wash and reprieve from carving

A group picture I stole. Hank took the shot. Missing Jamie and Jack if I  have that right? 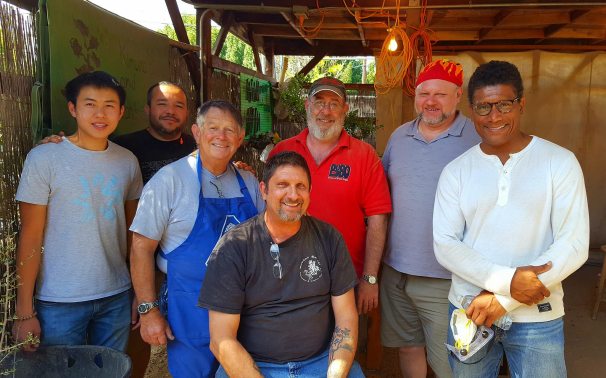 Well that’s it folks. If I find any good shots I’ll add them in. All in all I had a good time. It was nice talking to Nelson, Jamie, as well as meeting many new people. Was able to have a hand at my first serious carving attempt even if it wasn’t very good. Hope you enjoyed the read! These posts take quite some time to make so if you liked it a subscription is cool too.

4 comments on “Carving workshop with Will Baddeley”