I’ve been heading down to the Hidden Gardens often this past month. My work schedule at Argonne is pretty variable, so days I get off or get out early Jeff’s been letting me hang and help out at the nursery.

One of the projects I recently worked on was an American Hornbeam with massive dieback. In contrast to the coniferous yamadori found at the nursery Jeff started carrying collected deciduous material. Mainly American hornbeams, but red maples, lilacs, oaks, among others can be found.

Many of these trees have significant post collection dieback. On one end the dieback detracts from the value of the tree–the likelihood of creating a “seamless” trunk becomes increasingly difficult.

The same dieback however provides an opportunity to impart character and to impose a ruggedness characteristic of trees at the Hidden Gardens. Jeff gave me full reins to pick out a hornbeam to carve–so I did!

I have very little carving experience, but I did participate in one Will Baddeley workshop discussed here.

The tree I selected had a decent base with twin trunks–both of which significant dieback. 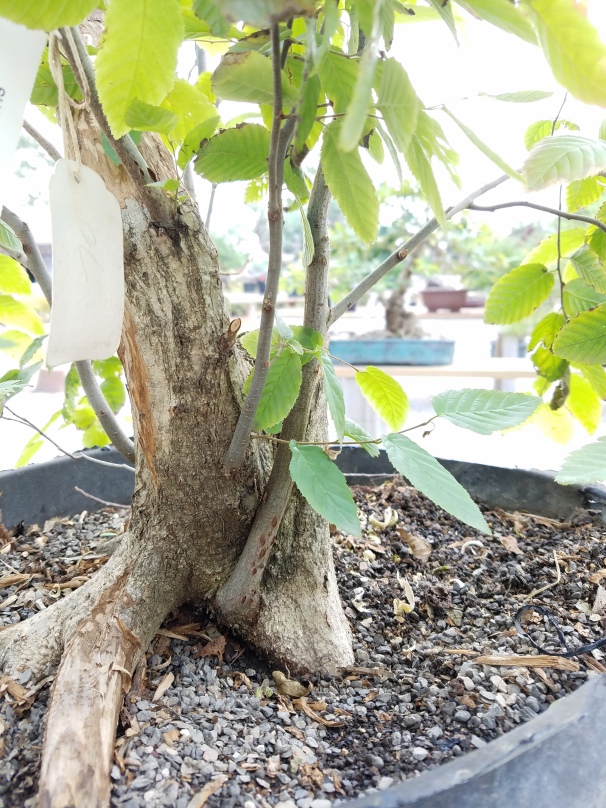 I neglected to take good before shots but there wasn’t too much to show. The bark was carefully stripped to separate the dead and live regions. The two trunks were crossing significantly so Jeff and I decided to cut the left one off. With minimal movement and little top growth on a mostly dead trunk the decision was easy.

I proceeded to shade the regions I wanted to carve out. When using high powered die grinders and dremels its easy to take out a chunk of tree you’ll never get back. Better to take it slow then to hog down big chunks of wood right off the bat.

After assessing the deadwood I began carving. First with the lower chopped trunk then with the top. A dremel was used both to establish a hollow and to add detail work. A die grinder was used on the top to remove excess wood.

The final height of the right trunk will actually be much lower (up to the sharpie) but I opted not to chop it back. Currently the narrow strip of cambium is solely supported by some top growth. Chopping lower risks dieback to the extent where deadwood will comprise more than half of the trunk. While deadwood has its place among deciduous trees it can easily become overpowering.

The trunk will be left alone with the intent of approaching grafting one of the suckers mid height onto the trunk. Until growth is established either through backbudding or grafting cutting back poses to great a risk. 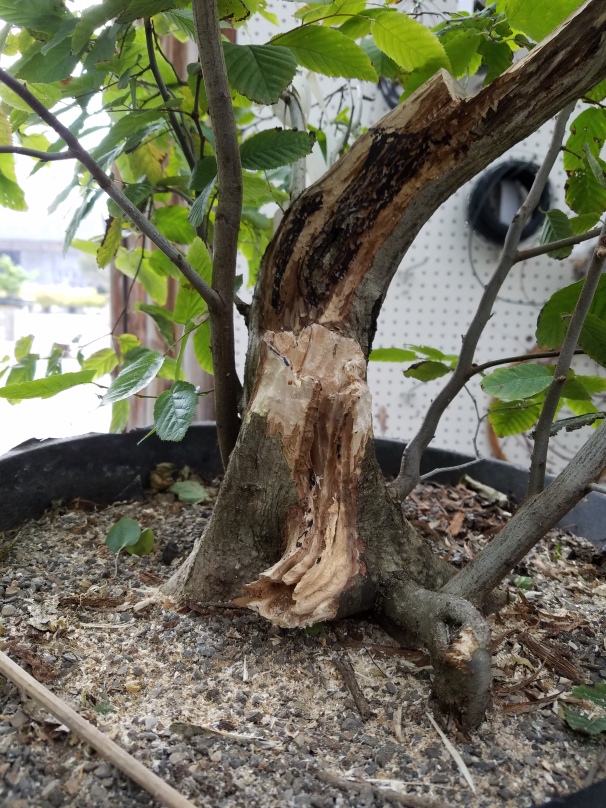 The bottom carving turned out very well. The top, not as much. It was challenging creating a wide channel through the curved trunk. The same techniques I used to create detail work on the smaller lower trunk resulted in a contrived appearance on the top. The second mistake I made was not offsetting channels in the top enough. This meant you could see through the trunk at some angles. Fortunately this was not the case for the potential fronts.

I may try to clean up the top more in the future and put more depth in the “flatter” areas. For now we’ll see how the grows next season as its not particularly strong at the moment. Working on this tree was good practice and I’m certain my next carving project will be even better.

Big thanks to Jeff for letting me potentially butcher a tree. I just hope that my work increased the value of the tree instead of depreciating it.  😅

On a side note I’ll be heading up to the Midwest Bonsai Show possibly all 3 days! I offered Jeff to help table and prep for the show so I’ll be hitching a ride with him up to the botanical gardens. I’m trying to reach out to the bonsai community more and hope to meet many people there. I plan to document the show on my blog so stay tuned.

For your viewing pleasure here are some photos of a sunrise I recently photographed: 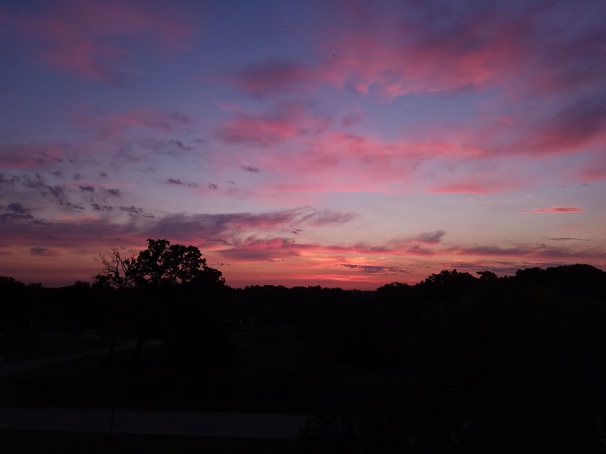 2 comments on “Carving Hornbeam at the Hidden Gardens”