In late 2016 I purchased a large variegated elm at a steal of a price. Within the thick canopy hid a region of significant inverse taper. Perhaps problematic but I immediately recognized the potential as a layer candidate. As a weaker ulmus parvifolia cultivar you don’t too many of em that has grown this big especially with such dramatic taper.

Can you see it in there? 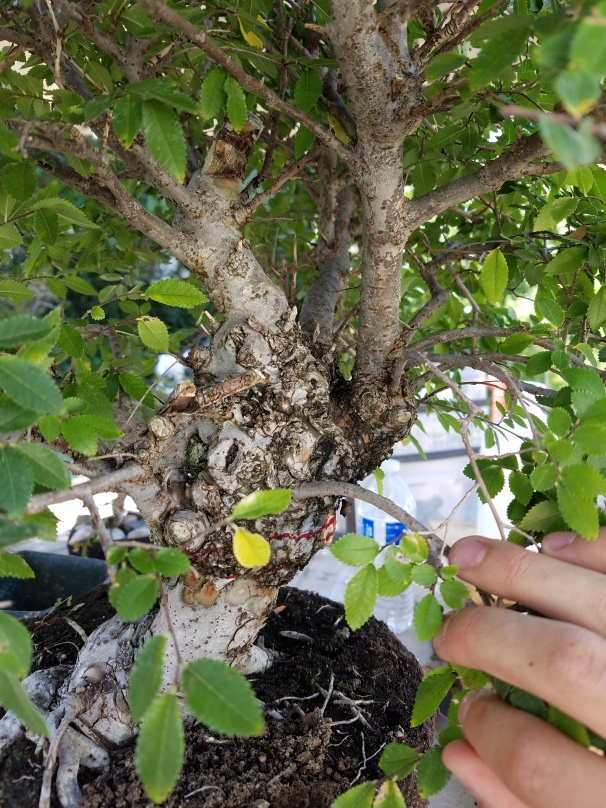 My best find to date

The large mid trunk bulge was likely produced through many years of pruning at the same node site. You can actually see a few old pruning scars on the trunk. At the time of acquisition it was mid summer in Southern California. Our growing season extends all the way to September giving me more than enough time to begin an air layer. 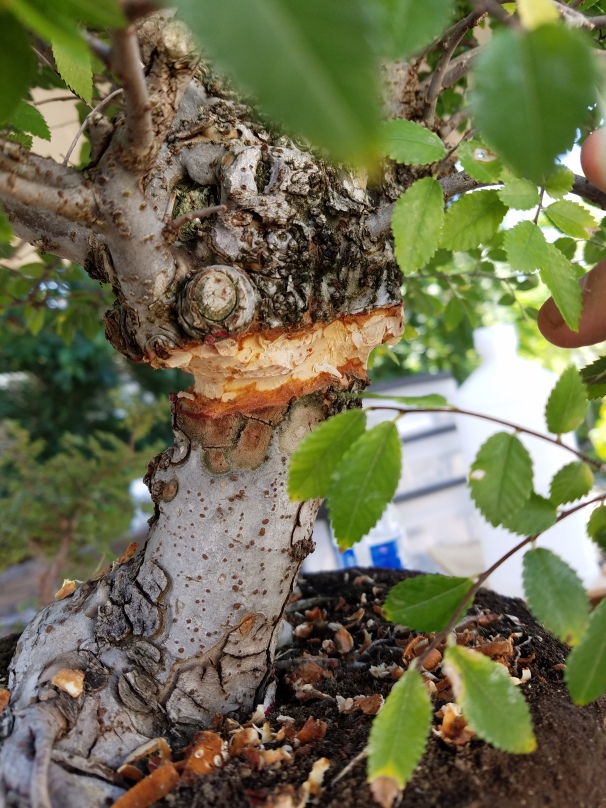 A common reason why airlayers fail is due to remaining cambium on the girdle. The brown exterior is the cambium while the immediate layers of wood underneath it is the xylem. When creating a girdle you forcibly prevent sugars in the cambium from returning to the roots. At the same time the wood underneath can still supply water and nutrients to the tree. Sugars and hormones build up at the cut site which over time generate new roots. If you mistakenly leave a strip of cambium the tree will actually heal or “bridge over” preventing the formation of roots. Airlayers always should be started after the leaves flush out and harden and take anywhere from 3 weeks to a year depending on species, age of wood, as well as the size of layer.

I neglected to take full progression shots but my layer medium is chopped spagnum and fine pumice. Chopping the spagnum in very small bits is important. It makes it a lot easier to remove the old spagnum in future repottings.

Here is the tree in fall. Another desirable feature of the hibari elm is the fall color. I’ve consistently seen the weaker variegated varieties producing nice fall color while their hearty landscape counter parts turn green to brown. It’s possibly the smaller amount of chlorophyll present in the leaves allow fall colors to emerge better. 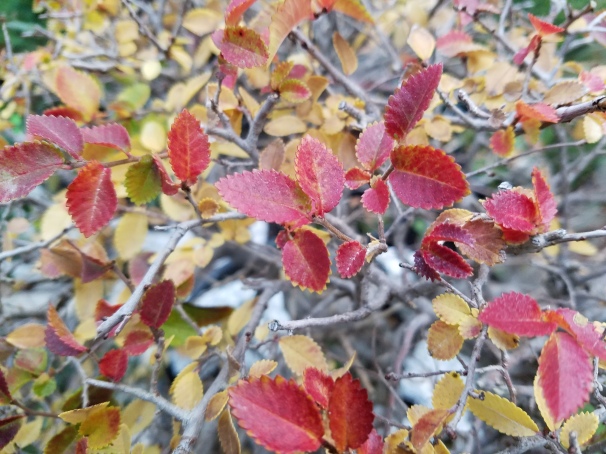 The winter image. At this point I have not cut anything back. The more branches and growth I leave on the tree the faster it will grow new roots at the girdle site.

The layer was severed around May if I recall right. It took around 6 months to complete this layer. Another important note is that unless you live in a mild climate like me with no freezes do not layer if it won’t be finished before winter. Freezes will kill the new fleshy roots forcing you start over in the spring.

The tree was transplanted into a pond basket and had several primary branches cut back. It grew very well and was exceeding healthy in the spring. 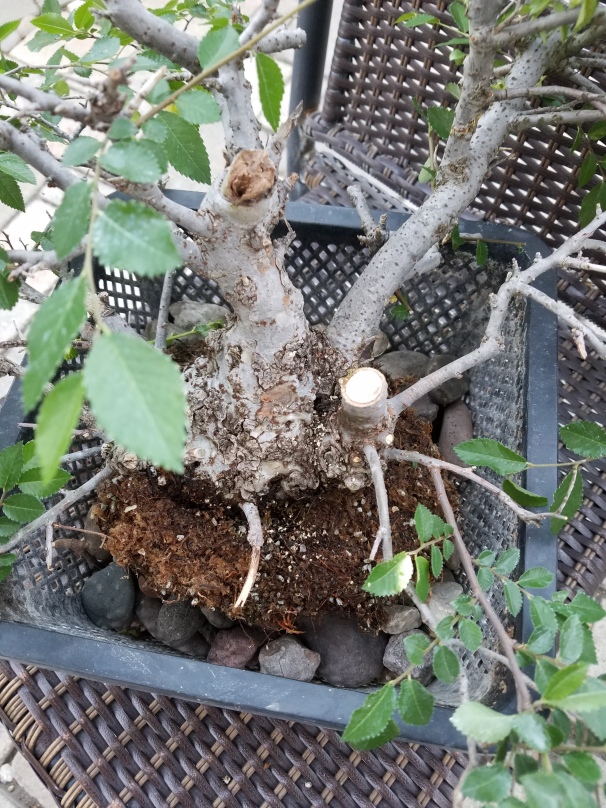 Unfortunately this summer I was unable to personally care for my trees when I moved near Chicago for work. From a watering issue, disease, or pest the tree dropped all of its leaves mid summer. Fortunately it rebounded back but I did lose some low primary branches.

I repotted the tree recently and was happy to find a lot of roots. I did some minor cleaning but did minimal pruning. 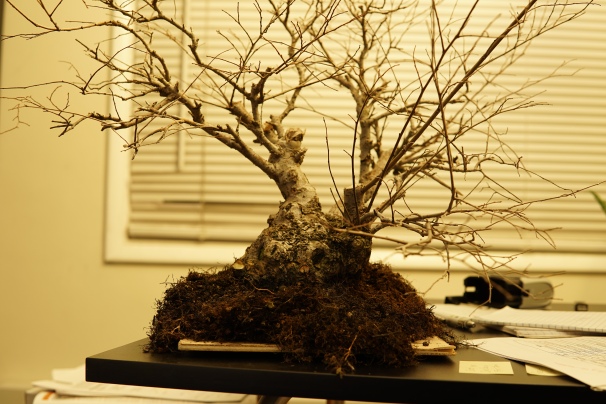 I screwed the tree to a piece of plywood prior to repotting. This encourages the tree to focus on lateral root growth producing a better nebari. Ideally I would want to clean the roots completely and put them flush against the board but given its weak state I do not want to risk the tree dying. As an older piece of material with high potential to be an excellent tree in the future health is the main concern. 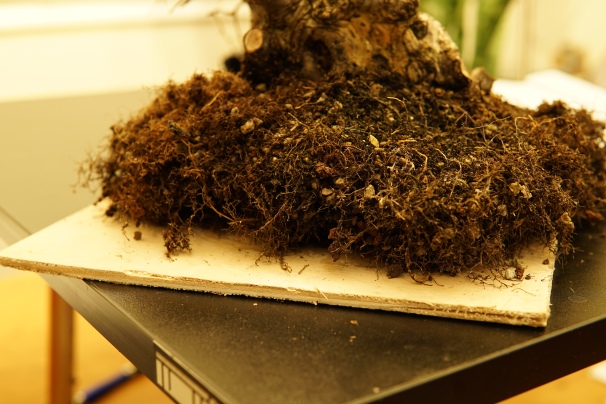 Decent mat of roots. Black regions are actually some dead roots which correspond to the branches that died. 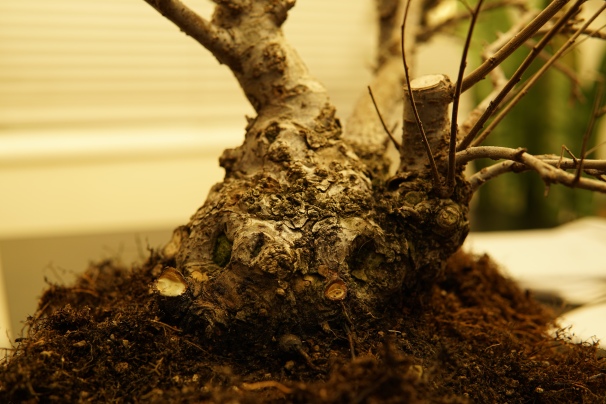 Some of the main trunk has died back but there is plenty enough green for new buds to rebuild lower branches from. 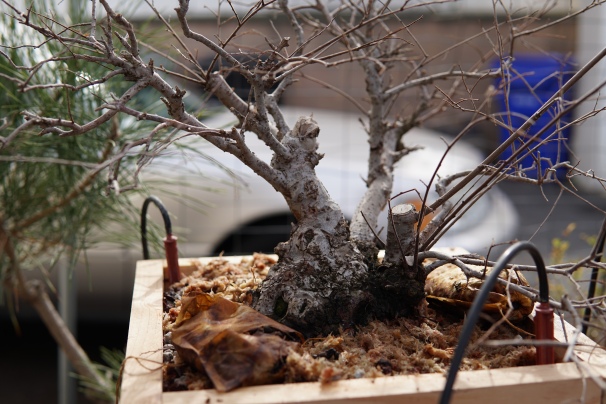 Repotted and rigged to my water system. Underneath the wooden board I used almost entirely 3/8ths lava. On the sides and top I used my standard bonsai mix with a little bark added. My soil is one part lava, one part pumice, and one part diatomaceous earth. I’d like to cut back but the tree is not strong enough. I will allow it to grow relatively unrestricted to rebuild strength before significant work.

Assuming a strong growing season next year I’ll really work the roots and begin building the nebari. There are actually many usable surface roots that in time will build the base of the tree.

On a different note I still have the lower half and will be using it to grow cuttings. Later this year I’ll he selling cuttings from the hibari elm and possibly other nice hard to find varieties. Be on the lookout.