I attended the Bonsai-a-thon, held annually at the Huntington Gardens, this past Saturday. Not only as an observer, but a participant this time around. I arrived at the gardens quite early, around 7:30 AM or so. It was very brisk, as evidenced by the thick layer of frost coating my car. The past week of weather has been highly unusually for Southern California. Temperatures in December were uncharacteristically warm with highs in the mid 80s in contrast to the near freezing temperatures over the past several days.

I talked to the usual vendors there, Barry as well as Frank who always sells his cork jades at a steal of a price. Arriving at the early hours of the show, I was able to get first pick and nabbed some of the nicer ones on table.

I also had a chance to meet up with some of the members from the bonsainut forum. Colin who has been working at and apprenticing at California Bonsai Studio has been a vendor the past few years. Christian, who is a young enthusiast like myself, was also at the show and enjoyed talking to him.

After talking for a bit I headed out to the greenhouse where a Huntington sponsored beginners bonsai workshop was held. I’ve done quite of bit of teaching and mentoring in a diverse range of topics to different age demographics but never quite something like a bonsai workshop. I was contacted by Keith a few months back who coordinates many of the events and volunteering at the Huntington. I was a bit cautious in accepting as I wasn’t sure my current skills in bonsai were up to par, but I’m glad I did. The material provided was excellent, and the students very friendly and eager to learn. 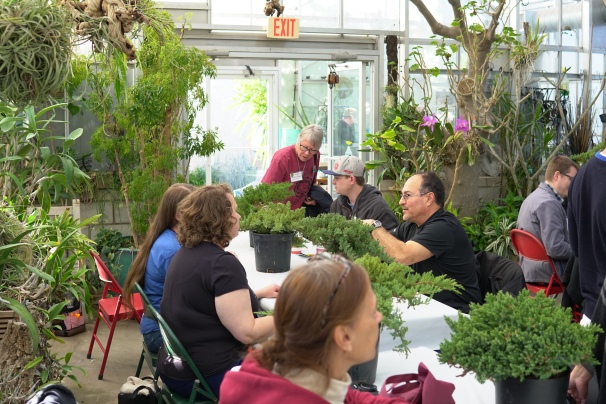 After I was given a student I didn’t realize that they were supposed to go pick their tree. A large group crowded around the table and I’d thought it be slim pickings when we got there. To my surprise there was an excellent procumbens left with good nebari (root flare), a trunk line, and many possible branch options. As per usual I often get carried away in the work and development that I forget to take before pictures to track my progress.

*Found a before short courtesy of Keith Martin

I discussed with my student the criteria for styling a tree and the qualities we desire. To start, a wide root base lends stability and age to the tree. Secondly we need a good trunk line with nice movement. The front of the tree that expressed these 2 attributes best would be our starting point.

Here is a shot of the tree after the first stage of work: 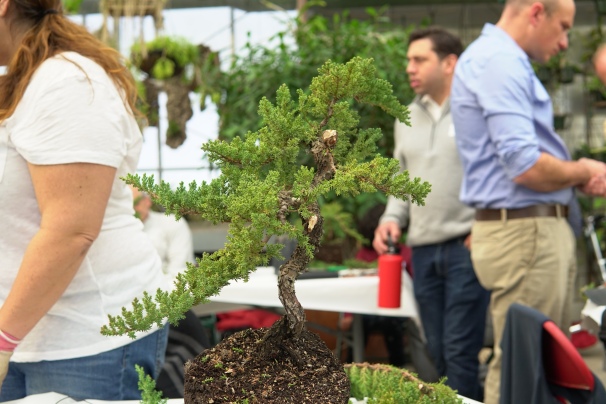 Next any downward pointing growth, weak or dead foliage, as well as any branches that were too thick or too small to be used were removed. In the above photo you can see 2 jins (branch stubs) that show where 2 large branches were removed.

The cleaning stage in my opinion is the most important. It helps reveal the tree and can bring potential design options to clarity. Conversely if you were to try to style the tree right off the bat you’re liable to remove a branch that may have been critical to the design of the tree.

A second concept I discussed was depth and illusion. Sometimes it’d may be difficult or impossible to shorten or lengthen a given branch. But by changing the angle we position the tree the branch can be visually shortened. Imagine a ladder leaning against the wall. Looking at it head on the height of the ladder extends from the upper point of contact to the ground. In reality we know it’s much longer, but in bonsai its the visual length we care about.

With this in mind I suggested that we tilt the tree significantly forward. Doing so brings the apex forward while lengthening the lowest left branch and the drop branch on the right.

From here we wired the trees and tried to from distinctive pads with negative space. 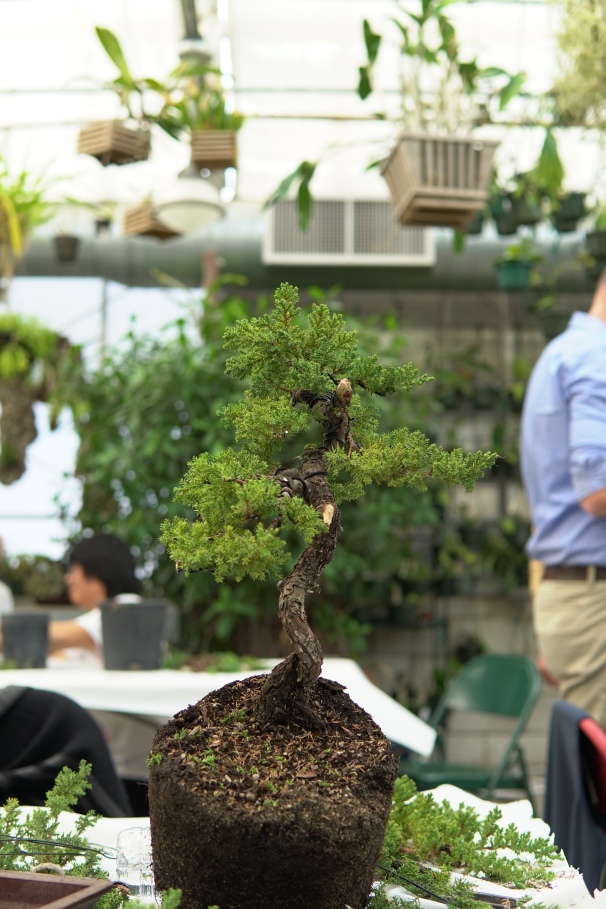 After further cleaning and potting. This tree ended up being the only tree in the entire workshop that was placed in an actual bonsai pot. Because the tree was tilted so significantly one side of the root system was considerably raised. The provided workshop pots were extremely shallow and small. Placing the root system in such a container would risk the health of the tree. I advised my student that she could leave it in there temporarily but to repot it in a deeper container of her choice as soon as possible. I mentioned that she could buy a pot at the show on the spot and she was completely on board. We picked a reasonably priced round that was met our criteria best and used it for the tree.

To have a very clean image and well executed design detail wiring every branch makes a huge difference. Unfortunately we were tight on time and had to stop here. All in all I think it turned out well and I hope I was able to effectively pass on knowledge to a new bonsai enthusiast. Ann, the student I worked with, picked on very fast and did a good job on cleaning as well as wiring for the very first time. Many bonsai enthusiasts quit after their first tree often from it dying or from the overwhelming amount of information involving bonsai care and development. Bonsai does have a steep learning curve, but it’s a very addictive and gratifying hobby. Perhaps some of the new students today will pulled in and become patrons of the art.

Lastly here are some photos of the trees on display. I missed the demos but there were many excellent trees local artists styled. 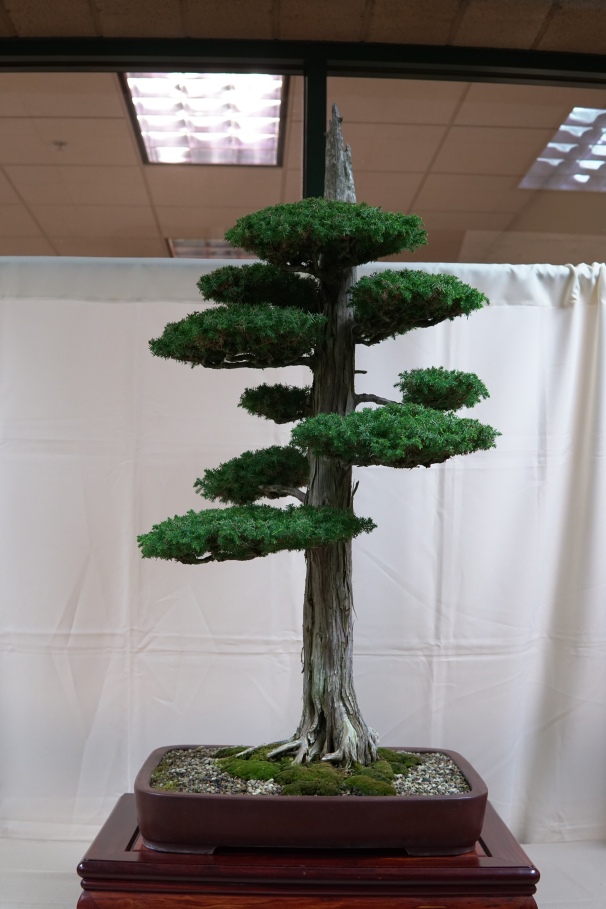 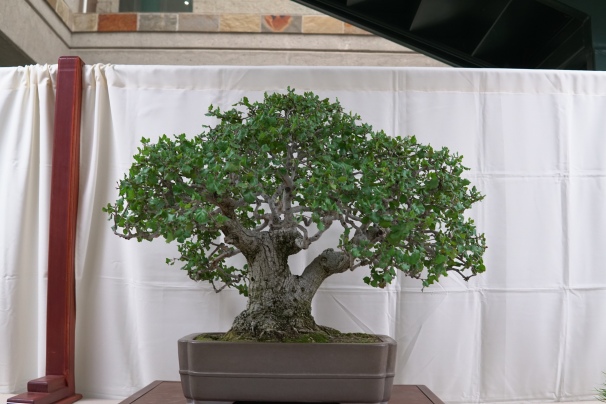 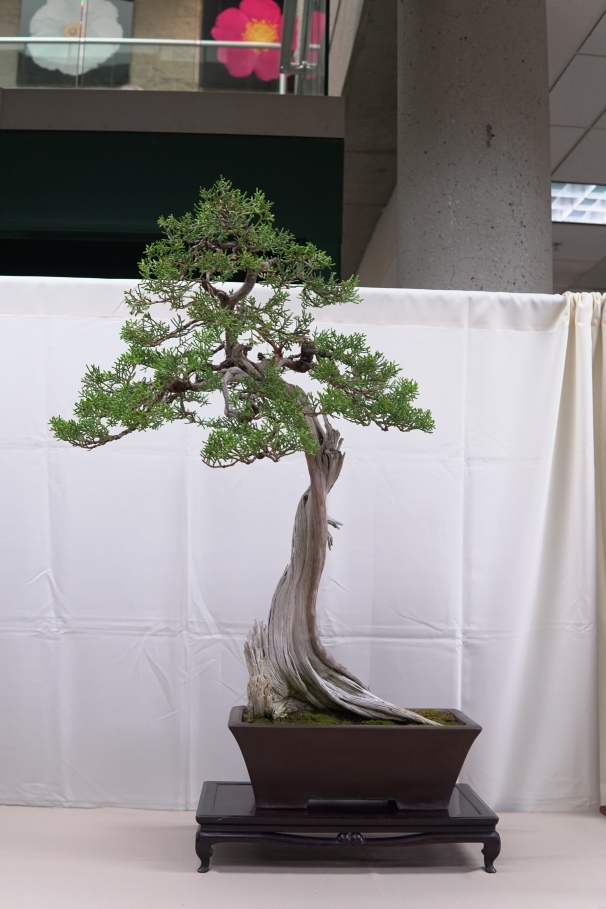 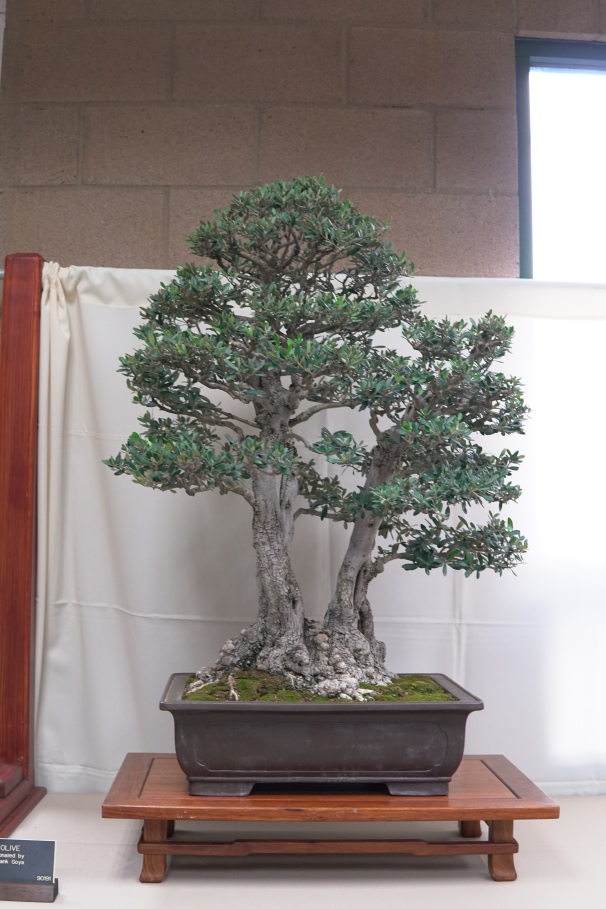 All in all it was a great show. Great group of people and made many new friends. Teaching a bonsai class was an interesting experience that I’d be open to doing again. Till next time.